Welcome to the new blog! 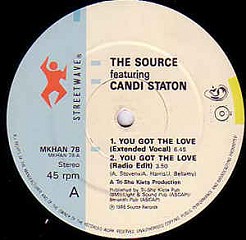 Welcome to the new blog, probably about 10 years to late to be all the rage but here we go.

For my first post I thought I’d write about my favorite First Dance songs and I’d better start with my own.

This original version is a rare groove/soul/gospel track (released in the UK by Streetwave in 1986). Candi said she couldn’t remember having recorded a song called “You Got the Love”. It was only later that she realised she had performed the song years earlier for the documentary.

The Candi Staton a cappella was originally mixed over an instrumental version of the Frankie Knuckles/Jamie Principle house tune “Your Love” This bootleg release was a recording of Eren mixing the two pieces of vinyl together. This version was mixed in the studio by Eren Abdullah.

The DJ Eren Original mix reached number 4 in the UK Singles Chart. It was remixed and re-issued in 1996 (including the Now Voyager mix), this time reaching number 3, the song’s highest position, and then re-issued again in 2006 with new mixes by the Shapeshifters among others, reaching number 7. The 2006 mix also featured more lyrics than the first two versions.

Even though the remix’s of this song are more well known than this original this is the version that I like the best and I always try and work it into my Rare Groove sets.

Plus it’s a fantastic first dance.